Steve Rowe made his way from working Saturday's as a 15-year-old at M&S Croydon, to CEO of the company, and has since firmly established himself as a prime example of a listening leader.

What did you want to be when you were younger? A soldier.

Best idea of all time? Micro-surgery to fix babies' hearts.

Best piece of advice ever received? Believe in medical science, trust your senses, read the poem If (by Rudyard Kipling), and there's no such thing as a bad idea.

In 2016, M&S was struggling. They needed to adapt and innovate in order to keep up with competition and continue to deliver the quality products and service that the iconic brand had become synonymous with, but somehow things just weren’t going to plan, and the retail giant was slowly falling behind.

The company turned to a new CEO in the form of Steve Rowe, who had risen the ranks of M&S having joined as a 15-year-old working Saturdays at M&S Croydon. Steve had impressed throughout his career having worked his way up to Executive director of food, then Executive Director of General Merchandise, prior to his role as CEO.

The important thing is to make sure there is a way of having two-way dialogue and we use a number of methods to do that.

Steve’s first-hand experience of the inner workings of M&S enables him to bring an intimate knowledge of the company at all levels to his role. In total, Steve has 30-years’ worth of experience working in the retail space, giving him an awareness of the value that each employee has to offer.

As CEO, he understands that the employees are the ones who work closest with the customers, and the closer M&S is to its customers, the more successful the company will be. So, he wanted to rouse employees at all levels and gather their insights around how the company could transform and improve

Upon his arrival as CEO, Steve announced a new scheme that encourages employees at all levels of the business to contribute their ideas towards helping M&S drive effective, innovative change across the business.

To transform our business, we need absolutely everyone to play a part. We have 70,000 passionate colleagues, and they know M&S better than anyone.

The program is named ‘Suggest to Steve’ to encourage employees to share their ideas by emphasizing that this initiative was one of personal importance for the new CEO; he’s here and he actively wants to listen.

With the growth of ‘Suggest to Steve’, M&S employees have helped identify solutions to problems people didn’t know they had, employees are able to have a direct effect in the transformation of the company, whilst the whole business is innovating each day towards a brighter future.

Suggest to Steve continues to thrive at M&S, check out more about how it works below or read our case study here:

Steve sat down with Sideways 6 Founder & CEO, Will Read, as part of our Listening Leaders podcast series.

You can listen to their conversation here as Steve shares why 'Suggest to Steve' is so important to him personally, as well as tips and advice for any prospective leaders out there. 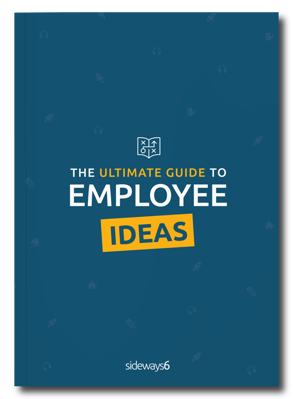