See how big businesses are using Microsoft Yammer to harness employee ideas and develop a culture of innovation.

Change is the new norm. Facilitated by globalization and technological developments, the pace of change is increasing, and its power is growing.

The thing with change is that you want to be the one driving it, not fortifying against it or – even worse – ignoring it. Remember Blockbuster and Blackberry?

To win in the game of change, you have to play. That is, you have to innovate. And who knows your business better than the people working in it every single day?

Big or small, delightful or practical, employee ideas can bolster the foundations of your business, helping to generate new products, services, processes, or improved customer experience.

When you start listening to employee ideas you can build a culture of openness, collaboration and intrapreneurship, where everyone is empowered to share their ideas and feel that they have a genuine stake in the business.  Wouldn’t that be great?

The best way to have a good idea is to have lots of ideas.

We often think big businesses are less responsive to change, with agility and lean processes being more commonly associated with startups.

But big businesses can innovate, engage and survive change.

Using Microsoft Yammer, the companies below have been able to seamlessly embed innovation into their organizations, creating safe places where employees can share and engage with new ideas.

1. Centrica – A small change for a big change

Due to the unprecedented pace of change in the energy sector, Centrica needs to continually innovate to deliver operational efficiency and continuous business improvements.

With an active Yammer network already in use, Centrica launched their campaign ‘Make a Good Idea Count’ (MAGIC) as a Yammer group. Drawing on the open and social structure of Yammer, the team were able to capture an amazing quality and quantity of ideas from employees.

Centrica had a process in place whereby they texted customers to advise them when the company had tried to phone them, but didn’t give the customer the option of texting back.

In August 2016, three call centre employees shared an identical idea on the MAGIC group. Manish from Mumbai, Sadia from Leicester, and Wayne from Cardiff all recognised the potential of allowing customers to reply to these texts.

The insight we get from our employees helps shape the future of change and allows us to prioritize the work we have to do.

A trial quickly confirmed that this simple change had a substantial impact on both call centre productivity and customer experience.

Customer satisfaction increased by 15%, repeat call centre customer outreach dropped to near 0%, and the estimated business value in savings was over $6m. Not bad for a text.

The $6.5m idea was far from a one-off. Centrica has achieved staggering engagement with their MAGIC campaign, capturing the imaginations of employees across their global network. Their campaign has collected over 8,000 ideas in two years, collectively receiving a whopping 46,000 comments and 33,000 likes.

So far, over 260 of these ideas have been brought to life, and the effect on company culture has been immeasurable. Magic indeed!

Avios found that the best way to engage their employees to collaborate and share their insights and ideas was to get creative.

They wanted to create an open platform for employee ideas as they don’t believe innovation should be limited to one team – any one of their employees could have a great idea.

They set out to engage their people to innovate in three key areas:

Using the initial campaign as a launchpad, Avios planned to have an impact so great that a culture of innovation would remain embedded long after the campaign ended.

Microsoft Yammer was already being used actively in various pockets of the company. The team saw this as an opportunity to reduce barriers to idea submission and ensure more great ideas were captured. They created a group called ‘Avios Ideas’, allowing people to socialize ideas and receive feedback from colleagues.

But they didn’t stop there.

Together with IAG Digital, Avios got creative and took the ideas and lightbulbs analogy to a whole new level.

They placed giant light bulbs all around the workplace with signage encouraging people to #LightTheBulb.

Every time a new idea was posted on the company’s enterprise social network, the bulbs lit up. Employees were quite literally lighting up the office with their ideas.

Check out the video below to see the lightbulbs in action:

Over a five week period, Avios were able to engage over 500 employees, with one-in-five people submitting an idea. 12 were sponsored, and the remainder make up a growing idea bank which continues to evolve through collaboration.

We needed to find a unique way to bring our people together. We wanted to create a buzz and get employees excited about sharing ideas.

Avios is also encouraging sponsors to get the idea owners involved in the development and testing process going forward.

The greatest challenge for Severn Trent was how to engage a workforce that isn't office-based.

Severn Trent's innovation team knew that the solutions to dozens of business problems would most likely lie within the company’s 5,000+ deskless, frontline workforce — the challenge was to find them.

The team identified that the key to engaging the workforce was simplicity, making it as effortless as possible for employees to put forward and discuss their ideas.

We didn't want to introduce 'yet another app'. We wanted to spark collaboration in the places where it happens naturally.

They created a group on Microsoft Yammer called Bright Sparks, and the innovation team targeted specific areas of the frontline to help spread word of the campaign.

A buzz quickly spread around the workforce and employees were excited to be involved in the conversation.

With over 1,500 ideas, comments and interactions in just two months, the campaign smashed expectations.

From ten shortlisted ideas, three have now been accepted into the company’s innovation portfolio with resource committed to bring them to life!

Okay, this story isn’t the sexiest. But sometimes the best ideas are practical.

British Airways decided to reach out to its employees for ideas on how to reduce emissions and cut fuel bills, ultimately wanting to help the environment and the bottom line.

Previous innovation campaigns at British Airways were run using focus groups of small numbers. This naturally limited the ideas that could be collected and the quality of collaboration.

Stepping into a new era of innovation, British Airways wanted to engage whole communities of employees to get many more ideas of a greater quality.

They ran a campaign, ‘Make it Great’, through a new Yammer community. From pastry chefs and pilots to cabin crew and cleaners, ideas were generated from across the workforce. Hundreds of ideas were submitted, included replacing glass with plastic for wine bottles, washing engines more regularly, and using lighter cutlery for business class passengers.

An idea of scale

The biggest idea of the campaign, however, was to descale the toilet pipes in order to make them lighter. The saving? $800k a year.

BA’s campaign is now estimated to have generated savings worth more than £20m – the fuel cost of 550 flights from London to New York.

The campaign helped the environment – as well as the bottom line – and just like the toilets, that’s not to be sniffed at!

This really has been a team effort. It goes to show that small changes here and there can add up to significant savings.

There was also a deep and lasting impact on company culture. Engaging through Yammer with their people, British Airways were able to develop trust and ensure that their people felt valued and part of a community. Not an easy thing to do as a big business.

Watch this video to hear David Williams, Service Recovery Strategist at British Airways, talk about how the campaign has changed the culture of innovation at the UK’s oldest airline:

So there you have it…

Big businesses can make the small ideas count. And, if it’s done right, there can be a lasting effect on company culture, making your business more innovative, resilient and transparent.

How you can do it in your organization

Why not try running you own innovation campaign through Microsoft Yammer? Here are some simple steps:

If you’re going to run an ideas campaign, you need to think about the why for your company.

There is so much benefit in creating a ‘home for ideas’ where ideas from anywhere can land at anytime, and the culture of innovation is supported. But in addition to this, why not consider running some time-limited campaigns, seeking ideas around a certain topic or question?

To find focus for your campaign, we recommend trying to answer the following questions:

Start a new Yammer community, where you can either make it open for the whole organization to access, or close it and only invite select groups for innovation.

Make sure everyone knows about your campaign, get them excited with clever branding, and empower them with senior stakeholder buy-in. This should be fun, so try to incorporate something unexpected (remember Avios?)!

Monitor and drive engagement, identifying top ideas and tagging employee experts to get their view and inspire more collaboration. Keep your employees up to date with the progress of their ideas.

Change is the new norm. Big or small, delightful or practical – listen to ideas from your employees to bolster the foundations of your business and flourish in this new age.

If you enjoyed this article, check out The Ultimate Guide to Listening to Employee Ideas on Microsoft Yammer! 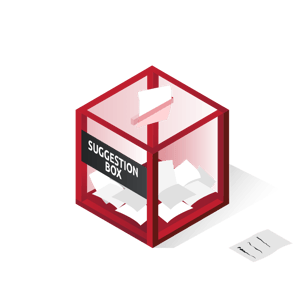 Ignite ideas on Yammer. Bring the best ones to life with Sideways 6.