What is intrapreneurship and why is it good for business?

Far from a spelling error, intrapreneurship can reap rewards from the top to the bottom of your business.

We're all familiar with the term ‘entrepreneurship’ – first coined in France in the early 1700s, it has since come to evoke images of successful, independent characters in the world of business.

But what about intrapreneurship?

While entrepreneurs start up and run their own companies, intrapreneurs are responsible for innovating within an existing organization.

Successful intrapreneurship utilizes existing frameworks and resources, and this bottom-up approach usually leads to initiatives that advance the wider company.

An intrapreneur is an employee who takes direct responsibility for turning an idea into a new product or service. An intrapreneur brings entrepreneurial thinking and skills to build within the structure of an existing organization.

from The Cambridge Dictionary

The setting isn't the only thing separating the terms – another important differentiator is risk. Working within an established business, intrapreneurs are arguably taking less risks than those leading ventures of their own.

The flip side is that entrepreneurship offers more freedom, unrestricted by operating inside of an existing organization and the possible limitations that come with that, whilst also standing to gain the most if the venture is successful.

"Intrapreneurs are the dreamers who do. The ones that take on responsibility for creating innovation of any kind, within a business."

The concept of intrapreneurship is credited to Gifford Pinchot, an American entrepreneur, author and inventor, who coined the term in a paper he co-wrote with his wife in 1978 entitled ‘Intra-Corporate Entrepreneurship’.

Pinchot highlights that, while intrapreneurs possess qualities such as intrinsic motivation and responsibility, they also display what he describes as the ‘both’ characteristic.

That is to say, intrapreneurship is more than just being an 'ideas factory'; real intrapreneurship means taking responsibility for the management of that idea and seeing it through to profitable reality – or, as Pinchot puts it so succinctly in his 1985 book, “intrapreneurs are the dreamers who do”.

You may not have heard of Pinchot (we hadn't either...), but the infamous Steve Jobs was also partly responsible for coinage of the term in 1985 when he described the approach of his Macintosh team to Newsweek as intrapreneurship, citing 'a group of people going in essence back to the garage, but in a large company.’

Want to see how you can improve processes with intrapreneurship

We've got you covered! Check out our page on how to 'Save time and money with employee ideas'.

Why is intrapreneurship important?

Given these definitions, it’s fair to say that intrapreneurship is considered highly beneficial for both the intrapreneur and the organization they are operating within.

From the point of view of the organization, fostering intrapreneurship can result in innovative change, results and an increased agility that, at the most basic level, improve efficiency, reduce costs or increase profitability.

It helps businesses generate growth, and also adds a level of flexibility; while a company may have become very strong in one particular area, an intrapreneur may see a new and different opportunity, direction or way of working.

One of the great benefits of an intrapreneur is that they know the company better than any outsider does, and that experience could mean they have seen an opportunity that has previously been overlooked.

Intrapreneurship also has the benefit of opening an organization’s eyes to potential leaders of projects that could bring about positive change. Intrapreneurs think and act differently to other employees, and possess characteristics often considered desirable in senior management.

Engaging these employees with different company functions to the ones they are accustomed to has the dual benefit of helping a company identify future leaders, while also training them at the same time.

Intrapreneurs: The dreamers who do

So that’s the view from the top, but what about the intrapreneurs themselves? From an employee perspective, an intrapreneurial environment is equally important.

If an intrapreneur sees that their idea is valued by their organization, it leads to a feeling that they can make a positive impact on the company’s future, ultimately heightening motivation.

Research shows that 82% of employees say they have ideas that could improve the business.

Likewise, access to company knowledge, advisors, mentors and – crucially – resources, helps grow the connection between an employee and the organization. Deloitte, for example, has created a £25 million fund to encourage intrapreneurs within its workforce,

Of course there are other, more basic benefits to being a successful intrapreneur – the financial rewards it can bring and the potential to further one’s career, for example.

The bottom line is that if an intrapreneurial idea comes to fruition, everyone stands to benefit.

Want to see how you can engage employees with intrapreneurship

We've got you covered! Check out our page on how to 'Create a great place to work with employee ideas'.

Examples of intrapreneurship at work

'Give me an example,' we hear you cry! We’ll do even better and give you five.

We mentioned Steve Jobs earlier, and with good reason. In the mid-eighties, Jobs and a team of some 20 Apple engineers split off to develop the Apple Macintosh computer, or ‘Mac’ for short.

This group, led by Jobs, was allowed to operate independently or “without adult supervision”, according to prominent Apple officials of the time.

This band of creative, innovative and entrepreneurial employees effectively created competition for Apple’s main line of products – a move that helped set the wheels in motion for Jobs’ eventual (temporary) exit from the company.

Simple and effective, the Post-it Note is key part of any desk-bound worker’s armor, and it’s another fine example of intrapreneurship in action.

3M scientist Spencer Silver’s invention – a sticky, but not solid, adhesive – went without use for years until Art Fry, a fellow 3M employee, went searching for a way to keep his bookmarks stable inside his books.

Now that's what you call an idea that sticks...

The Sony PlayStation has become a global phenomenon, but it was a project that initially faced much resistance. Sony junior staff member Ken Kutaragi, a self-proclaimed ‘tinkerer’, ploughed on and worked alongside Nintendo’s development team to bring what would become the PlayStation to life.

Nintendo rejected the idea, which we assume to be a great regret given that Sony Computer Entertainment (SCE) has gone on to become the company’s most profitable business division.

And the intrapreneur himself? He went on to become Chairman and Group CEO of Sony Computer Entertainment, and is known as ‘The Father of the PlayStation’.

An outstanding example of a company that has fostered an intrapreneurial environment is multinational technology giant Google.

As a motivational technique, the company introduced a policy often called ‘Innovation Time Off’, where engineers are encouraged to spend 20% of their working hours on projects that interest them.

These independent endeavors have reaped rich rewards, resulting in services such as Gmail, Google News, and AdSense.

As the UK’s largest energy and home services company, Centrica is constantly striving for ways to improve customer service, cut costs and increase revenue, and with a little help from Sideways 6, they did just that.

BONUS! Want one more? Listen to our podcast telling the incredible story of Flamin' Hot Cheetos. The fascinating tale of a janitor from an extremely poor background who defied all odds to propel his idea, and himself, to the top of the business world:

How can I encourage intrapreneurship in my business?

So you're an organization full of bright minds and potential intrapreneurs, all waiting to help drive growth in your company. Now how do you find them?

One key aspect of fostering intrapreneurship is in listening to employee ideas and giving them room to develop – but you still need a process in place for them to realize their full potential.

Plan and create a realistic process that will allow you and your intrapreneurs to both define your goals and execute them successfully.

Once you have identified your intrapreneurs, bring them together and expose them to the idea development process. Rather than tasks and projects, offer them freedom and goals.

Earlier on we looked at some of the traits that intrapreneurs demonstrate – these are not people who want to be tied down and micromanaged, rather they want to be empowered, individualistic and allowed to operate outside the box.

Encourage them to step outside the scope of their work, to brainstorm, innovate and to be unconventional. Offer them resources and also, crucially, time to reach their goals.

Accept that failure is inevitable at some stage, and do not stigmatize it when it happens. Every failed enterprise is a lesson learned.

Similarly, when the path that your intrapreneurs have laid does lead to success, welcome it, celebrate it, and build on it.

Want to see how you can drive sustainability through intrapreneurship

We've got you covered! Check out our page on how to 'Accelerate sustainability with employee ideas'.. 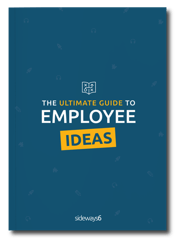 Get your hands on 56 pages of tips, tricks and insights learned from over 250,000 employee ideas.