What is integrated idea management?

We take a look at how integrated idea management differs from traditional methods and enables employees to collaborate on ideas.

Ideas. We’ve all had them. Some are big and ambitious, some small and simple. Some are good (the wheel, sliced bread, the internet...), some are bad (chocolate teapots, glass skateboards – yep, they exist).

It’s those good ideas we want to focus on, of course, because when it comes to a business, ideas are everything.

Whether it's coming up with innovative and disruptive new products; continuously improving processes and reducing costs; or engaging the workforce on important strategic challenges - Employee ideas play a major part in the sustained success of many of the world's biggest and best companies.

What is idea management?

Idea management, then, is an important weapon in an organization’s armoury.

It means that a structure is in place to generate ideas, identify the best ones from the pool, capture and organize them and, ultimately, implement them for the benefit of the company, in a way that wouldn't have happened through normal processes.

Idea management is a structured process of generating, capturing, discussing and improving, organizing, evaluating and prioritizing valuable insight or alternative thinking that would otherwise not have emerged through normal processes – Gartner

When done well, employee idea campaigns, backed up by effective idea management, can be really effective in helping companies grow and succeed.

The problem with 'traditional' idea management 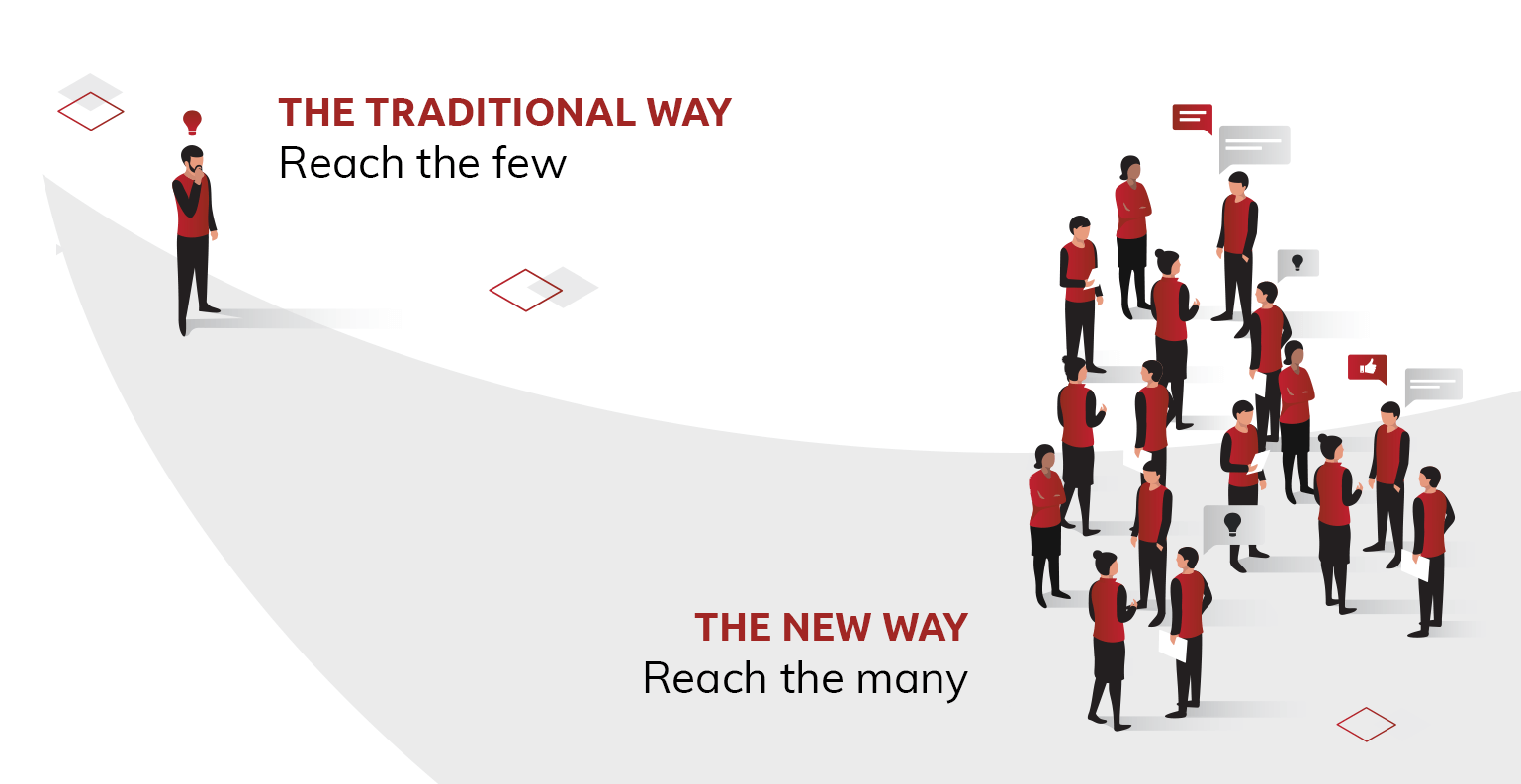 The problem is, it’s not very easy to do it well… In fact, it can be pretty darn hard!

According to a study by Gartner, over 80% of collaboration efforts fail due to lack of adoption. That means if every company in the Fortune 500 tried to run an employee ideas campaign, 400 of them would fail! Ouch.

While there are multiple reasons for why this may happen, the most common challenge a company faces is gaining and maintaining engagement.

When a company introduces a new app or tool for an employee idea campaign, it can be pretty hard to get people to adopt it, and even harder to make sure people continue to use it.

So, how can you get employees engaged with your ideas campaign?

Well, rather than trying to convince your employees to download and use yet another app that they’re not used to, why not meet them on the tools they are already using every day?

You don't need more tools.
You need your tools to do more.

Collaboration tools such as Microsoft Teams, Microsoft Yammer, Workplace from Facebook, and Slack are now at the center of our working day.

In fact, the ‘big 4’ now have over 160 million (and growing) daily active users between them. Take a look at the chart below to see the exponential rise of collaboration tools in the modern age:

The world of work has changed and companies in all industries are relying on these tools to facilitate and host their collaboration efforts, both for desk-based workforces and those 'on the frontline'.

This change has led to a new way for companies to encourage employee-led innovation called integrated idea management:

Integrated idea management is an approach of listening to ideas by using pre-existing tools and software, rather than a dedicated ideas application. All the ideas collected are then fed into a single platform where they can be filtered, reviewed and managed accordingly.

There's no need to login and learn how to use a dedicated ideas app. Instead employees simply share and collaborate on the tools they know and love.

In practice, this means employees are empowered to submit and discuss ideas on the tools they already use in their working day - the 'front end' of the campaign.

These ideas are then fed into an idea management platform, allowing teams to manage them at scale - the 'back end' of the campaign.

This infographic shows how it works:

The benefits of an integrated idea management approach is that it engages people and encourages collaboration – particularly important at organizations with a large, disparate workforce – by using existing tools as opposed to learning to operate yet another new application.

Click the video below to hear what Kevin Traynor, head of Centrica's employee-led ideas campaign - 'MAGIC' had to say about why Centrica chose to take the integrated approach with Microsoft Yammer:

You can hear more about Centrica's MAGIC program on our Masterclass here.

Centrica is not alone. In the last few years, more and more companies have made the shift towards an integrated approach to idea-management, with the likes of Nestlé, AstraZeneca, and Balfour Beatty all reaping the rewards.

With 260,000 digitally connected employees, Nestlé wanted to inspire employee-led innovation and unleash a culture of intrapreneurship throughout the company.

However, they initially struggled with driving engagement in the campaign, finding it difficult to reach such a vast and disparate workforce.

Nestlé had, at the time, recently rolled out Workplace from Facebook as a company-wide collaboration tool and so they made the decision to use this as the central platform for their employees to share and collaborate around ideas.

Check out the video below Nestlé released within Workplace to help promote their campaign:

Teaming up with Sideways 6, Nestlé leveraged Workplace from Facebook as the central platform for their ‘InGenius Intrapreneurs’ initiative and saw employee engagement increase by over 90%!

Another example of how the integrated approach can sky-rocket your ideas initiatives comes from the construction conglomerate, Balfour Beatty, and their employee ideas program – ‘My Contribution’.

As a construction company with such a disparate workforce, it was difficult for Balfour Beatty to ensure that every employee felt they could get involved with the campaign. In 2018, Balfour Beatty decided to move to My Contribution to an integrated approach, with Microsoft Yammer as the front-end. 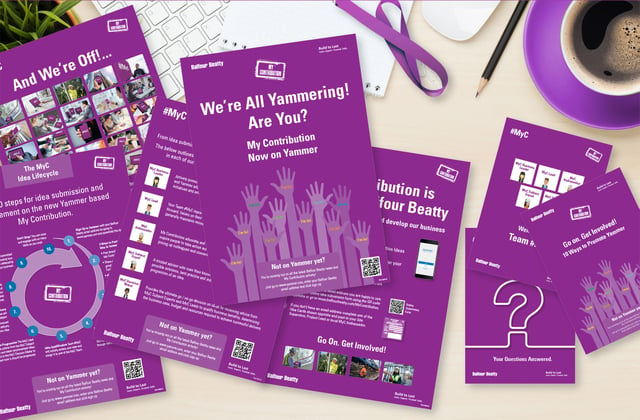 The integrated approach provided an open channel for real-time collaboration which crosses over functions, business units, and geographical locations, bringing employees together to innovate around new ideas.

Balfour Beatty has now seen 6,000 ideas submitted with over 82,000 likes and comments on these ideas. What’s more, ‘My Contribution’ also helped to popularize Yammer within the business, with the collaboration tool achieving an 89% employee approval rating. The ideas themselves have achieved over £6m in cost savings!

Have a look at the full story of Balfour Beatty's 'My Contribution' here!

We've got you covered! Take a look at these 6 companies generating employee ideas with Workplace from Facebook,  or 4 companies using Microsoft Yammer to generate employee ideas.

Is integrated idea management right for you?

If you’re only looking for a handful of ideas from a small number of people then the integrated approach may not be right for you. For initiatives like this, something like a hackathon or a focus group can work really well and will often give you what you need.

However, if any of the following are true for you:

... then integrated idea management could be the key to unlocking the idea potential at your business.

If you enjoyed reading this article, be sure to check out our 'Best Practice Guides' to running employee ideas campaigns on Microsoft Teams, Microsoft Yammer, and Workplace from Facebook!

Get your hands on 56 pages of tips, tricks and insights learned from over 250,000 employee ideas.